The joint A330 and A340 programme was launched in June 1987. It marked the final stage in the creation of a full range of wide body products, one of the aims of Airbus Industrie since its foundation in 1970. The A330 and A340, twin and four-engine variants of the same basic design, cover a wider spectrum of airline needs then has ever before been offered in a single program. Detailed consultation with potential customers from well before launch and close cooperation with early operators from launch to entry into service have resulted in market-matched products with enter service at a high level of maturity.

The common A330/A340 airframe is offered in two different fuselage lengths and with four different engine types, providing exceptionally high levels of commonality in structure and systems. The lead in electronic integration established by Airbus Industrie also confers unprecedented commonality with other aircraft in the Airbus product line, bringing further economies in almost every aspect of operation.

With the A330/A340 programme, the Airbus production system has extended to almost world-wide coverage. Major contracts with companies in Australia, North America and Korea supply the production plant across Europe which feed the final assembly facility in Toulouse. A pioneer of international cooperation, Airbus Industrie is leading the way to global cooperation.

Commercialy, The A330/A340 programme has achieved considerable success. Over 220 firm orders have been placed by 34 customers, more than any competing programme.

The two A340 variants are enabling operators to develop new long haul non-stop services precisely in line with the needs of international business travellers. Like the A300 before it, the A330 is poised to bring new standards of economy to busy Asian, North Amirican and European routes.

From early 1989, « A330/A340 countdown » has highlighted some of the many inter-related aspects of the development, initial production and testing of this unique pair of complementary aircraft. This collected edition of the « Countdown » series is offered as a record of achievement – the achievement of many thousands of people in the Airbus system and in related organisations throughout Europe, in the USA and many other countries world-wide: moving ahead, together. 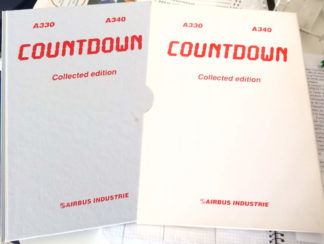